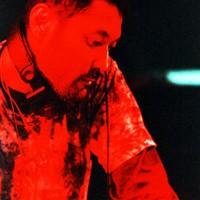 Izuru Utsumi
As a composer, performer, DJ, vinyl collector, music lover, Utsumi is trusted through out the Japanese EDM scenes and industries . Since childhood, he has been impressed overall by all sorts of sounds and music, vintage and contemporary, from east to west. His aggressive range of activity is broadly known, his unique influences he has brought to the scenes throughout can’t be seen just anywhere.

He started his carrier as a DJ in the mid ‘80s, in art spaces, clubs, open-air festivals, uncountable sessions with musicians, collaborations with video artists and lighting artists. During the 1990′s, he presented numerous un-English cultural music such as Brazilian and Latin Music in a attractive format for dance floor when there was not much information around club-music at the time and he is also recognized as the leading authority on this field. Especially his compile works are highly appreciated by many DJs and music lovers around the world.

As a composer, he has releases from labels such as, DISORIENT (UK), Ubiquity Records (USA), SSR Records (Belgium), Yellow Productions (France). His First Euro tour was 2000 Autumn included in Berlin and in London. In 2002, he released his first solo full length self-titled album from Flower Records (JP). In 2003, he set out on a second Euro tour including European Capital of Culture at Graz, Austria. During the 2000′s he has been energetically making music as sound designer. From 2009 he has started up laptop live performance on “izzy” his experimental project. In 2012 Autumn, he launched “Auwa Records”, Utsumi’s possibilities are still immeasurable.