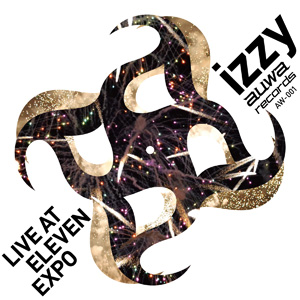 and hundreds of digital music stores around the world!

DJ Izzy Utsumi has released his new extended-play album, the “Live at Eleven Expo EP.” The record features 17 minutes of original digital music in three tracks. Those familiar with Utsumi’s music will not be disappointed with this latest installment to his collection, which features postmodern techno and house effects, and melodies that change from movement to movement like classical compositions. His beats vary from driving, heavy-hitting industrial sounds to natural percussion partially inspired by traditional Japanese music. This dichotomy in tone, the blend of high-tech digital sound and native naturalism, is one of Utsumi’s key characteristics.

This attribute is seen even in his stated influences. Where most artists name great musicians and bands, Utsumi (born Izuru Utsumi) right away begins naming his real inspirations. In the order he gives them, they are faithfully reprinted here: “Nature, Astronomy, Budgerigar [a singing bird], Ethnic music around the world…” But he is by no means deaf to the music of humankind. He goes on to name “Miles Davis, Moondog, Egberto Gismonti, etc.” He also urges dancers and music listeners all over the world to realize their “global ethnicity.”

Utsumi has been making music since the 1980s, and is well-known and respected in the Japanese EDM underground scene, as well as in the industry. His experience in music is as well-rounded and open-minded as his tastes. He began by singing hymns in his youth, and learned to play keyboard. His listening habits grew to encompass soul, funk, jazz, rock n’ roll; later he moved into the Central and South American flavors, Latin, Brazilian, reggae, dub, and from there into so-called world music, the indigenous music of peoples around the globe. He decided to learn the bamboo flute, an instrument in traditional Japanese culture. When electronic music hit in the ’80s, Utsumi was there. He became enthralled and entrenched in every corner of it: hip-hop, house, techno, breakbeat. Now he stands as one of the underground movement’s founding fathers.

When asked about the message his “Live at Eleven Expo EP” may have for fans and listeners, Izzy Utsumi is very brief.

“Express free will through music,” he says.